We are proud to say that Forest Hill is first and foremost a reading school.

Our School Librarian, Mrs Hans, is assisted by Mrs Gooding. Everybody associated with the school is encouraged to read and share their literacy experiences: students, staff and parents. Our Library sits at the heart of the school and everything it achieves.

Every pupil in Year 7 and Year 8 enjoys a supported library lesson in which to read, choose and discuss books.

Our Library Management System is available in school or from home, pupils and staff can review the books they have read and search for books and online resources.

Our Library Management System is available in school or from home, pupils and staff can review the books they have read and search for books and online resources.

Pupils should reserve books that they want to borrow, library staff will deliver these weekly (and collect returned books) in library lessons for Years 7 & 8 and in tutor time for Years 9-13.

Our Library ePlatform is also available online and as an app for our pupils to borrow ebooks and audiobooks.

Word of the Week

Research tells us that vocabulary skills are strong indicators of academic success.  Having a wide vocabulary also empowers children and adults to participate confidently and meaningfully in the world around them.

This year there will be a featured FHS Word of the Week for boys and staff to practice using and to absorb into their vocabulary.

Parents are encouraged to use the words too and to continue fostering a love of reading in the home, as reading and a wide vocabulary go hand-in-hand.

Have fun with our Word of the Week:

We hold Poetry Jam in the Library every half term where students and staff get together to share their experiences of poetry through readings and performance.  If you feel inspired then feel free to come along and add your own contribution for the next Poetry Jam. 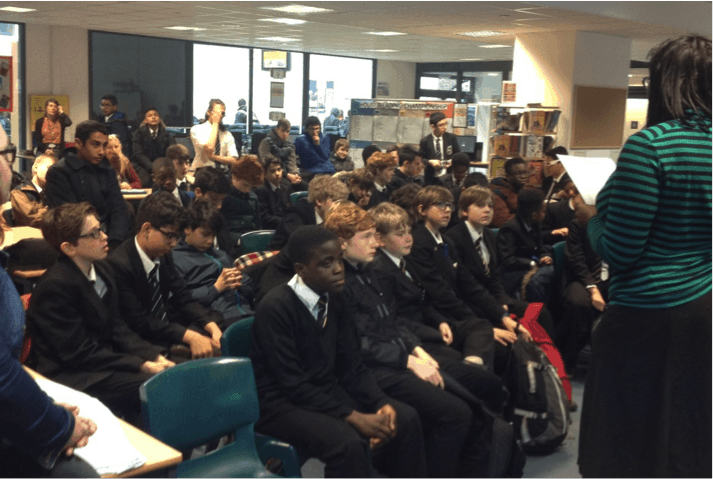 Tom Huddleston was a hit with pupils when he visited us in March 2020 to talk about his books “Floodworld” and “Dustroad”, these are just some of the many positive feedback comments from our pupils:

– I liked how we discussed how to make the world better.

– I enjoyed today’s lesson because I found it interesting to hear what inspired people to be writers.

– I liked when he talked about his inspiration for the book.

– I enjoyed when we asked questions. There was a very interesting discussion about trade deals I liked it when he read the book.

– I liked the story idea, it was very cool and interesting.

– I loved the new world and the futuristic planet.

– I have learnt that we can make things with science.

– I learnt how to say bread in Latin (Panem).

– I enjoyed thinking about how the future would be.

– I learnt that it is very easy to come up with an idea for a book than actually writing it.

Tinoosh wrote this fantastic review of Floodworld, which Tom’s visit inspired him read:

“This book made me feel excited on every page and I didn’t want to put the book down. The book has made me think before I dump rubbish into the ocean and the effects it will have on my and others lives now and in the future.

The best aspects of the book were the setting as it went well with all the characters. The story and the setting fitted perfectly with my expectation as a mostly water-based setting it didn’t subvert my thoughts as I didn’t know that much about the story. The major turning points in the story is when you think the bad guys are good but it turns out they are actually bad.

The world in the book has many aspects like the real world except the planet has been devastated by climate change and caused the sea levels to rise drastically and flood many countries including London, England where the story is set. The story ends when people who seemed like they were enemies drive the actual bad guys out of London.

The main characters are two friends from the poor area of London whose dreams are to move to Canada where they say everyone is safe. The biggest problem that they face is the bad guys are out to capture them all for a map. The characters biggest choice is to risk their lives to save others or protect themselves and run away. They are motivated by the thoughts of getting a better life. The consequences are almost being killed by the bad guys.

They learn to cooperate and put others before themselves. The characters change by learning they have a brilliant home where they are. The author uses a detailed style of writing and they also convey the story in quite intricate detail.” 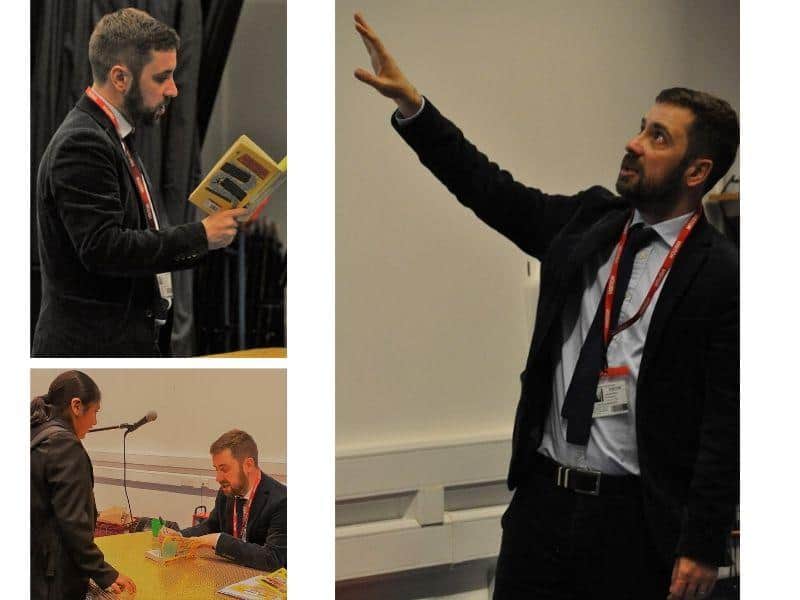 Year 7 had a fabulous time with author Tom Mitchell, who talked about infamous bank heists, the tension created by attempted heists and the adrenalin rush of car chases in films.

These were all sources of inspiration for his first novel, along with a funny story of what had once happened to his dad.  Tom also read a couple of extracts from his novel “How to Rob a Bank”, which lots of boys are now eagerly reading, some were able to buy their own signed copies and we also have a supply in the library.

Author Sue Cheung came to Forest Hill School to speak to Year 8 about her first novel “Chinglish”.  We invited other local schools to bring a few pupils as well, as Chinglish has been chosen as one of the Lewisham Book Award older category titles this year, so will be read in schools all over the borough.

Sue’s story is very interesting, as was her presentation – often funny, at other times tragic.  There were lots of questions asked at the end and sometimes the answer was “read the book to find out!”, lots of our boys are doing just that, with copies on sale on the day and available to borrow from the library.

It was a privilege to host author Nikesh Shukla in Black History Month 2019.  He spoke to all our Year 10 students about a racist threat he suffered, explaining how he overcame the reaction he had by building his confidence and presence and how he had drawn on those experiences in writing his latest book “The Boxer”.

The boys were very interested in hearing about his life and that of his uncle, who brought the first case under the original Race Relations Act.

Nikesh Shukla is an award winning writer of short stories, writes for the BBC and national newspapers and has written another YA novel called “Run, riot”.

Lucy Van Smit struggled with dyslexia when she was younger, but went on to work successfully in television.

She engaged our Yr 8 boys with the story of her life and the making of stories. She also spoke to our set 1 / top set (not sure how the school will want to word that) Yr 9 English classes about her remarkable book “The Hurting” and you could hear a pin drop as they took in the nuances of the story and then discussed the ways in which storytelling can be used in many careers, including in top tech companies.

Copies of “The Hurting” are available to borrow from the library.

He covered empathy, stereotypes, British black history and the importance of reading. As well as engaging 200+ pupils in the theatre he worked with RE, drama and history classes. Staff and pupils agreed it was a fantastic day.

Bali’s fiction books are available to borrow from the library and we also have a good stock of British black history non-fiction books for those who want to research some of the topics Bali spoke about.

FHS boys enjoyed Andy’s previous visit and some have eagerly read his “Inventory” series. Pupils and staff will be able to buy a copies of Andy’s books and have them signed at 3pm in the KKT. Copies will also be available in the school library for boys to borrow

On 12th June author Penny Joelson spoke to our Year 8 and 9 students about her recently published book ‘I Have No Secrets’ which has been nominated to be included in the book list for the 2017 Lewisham Book Award (older category).

She led an interesting and thought provoking session examining how vulnerable voices can be represented in literature and society at large, as well as some fascinating insights into the process of how an author’s manuscript is transformed into a printed book.

Several copies of her book are now available to borrow from the school library.

Tom Angleberger, bestselling author and comic writer, will be talking to students about his Marvel’s Guardians of the Galaxy – Rocket and Groot series on Friday 26th May.

Derek Landy has sold more than 17 million books in 37 countries around the world with his internationally acclaimed Skulduggery Pleasant series. We at Forest Hill were lucky enough to welcome him on Friday 24th February.

Students collected their author visit slips and book order forms and took part in what became one of our most anticipated library events of the year!

How could an orphan living in Vancouver end up in 16th Century Japan, fighting against the terrifying forces of darkness in a battle to save the world? Author Ambrose Merrell gave his first ever school talk, meeting some Readers’ Club members and Year 8 classes.

Our Key Stage 3 boys and some girls from Sydenham School enjoyed an excellent talk from Sara Grant about her new book, Chasing Danger, and the creative writing process.  All that attended will hopefully have been imbued with the desire to write their own masterpiece!

The whole of Year 7 enjoyed finding out about beetles as well as getting a glimpse into the pages ofBeetle Boy, the new novel by M.G. Leonard.  We also invited pupils from the nearby Adamsrill Primary School who were enthralled and asked great questions. Copies of Beetle Boy are available to borrow from the Library. 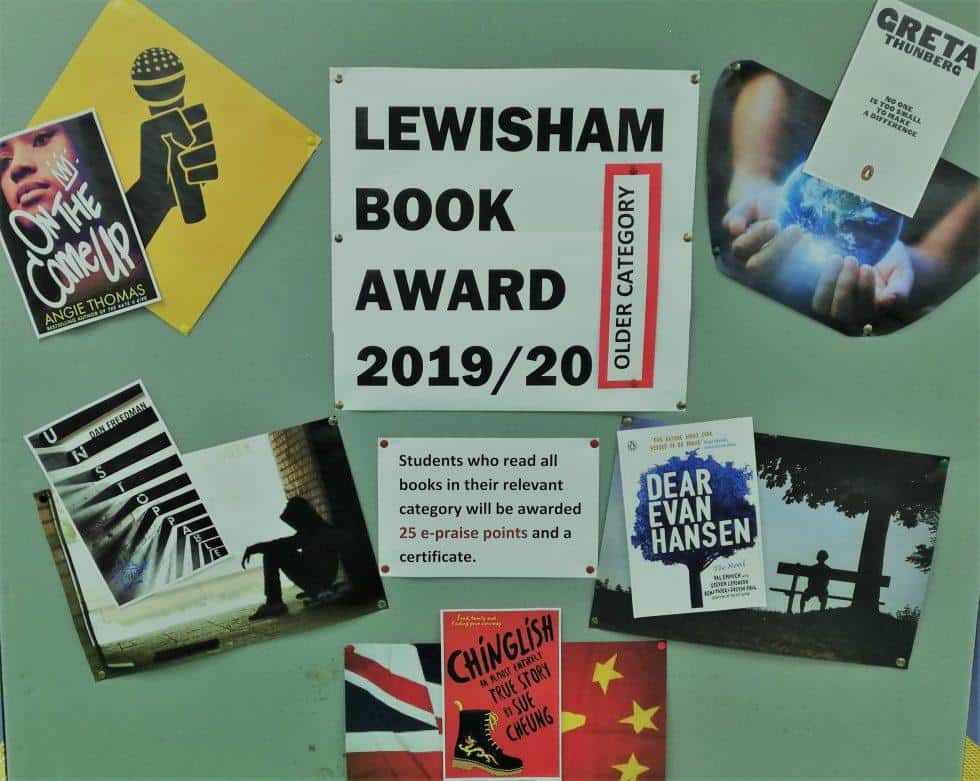 The Annual Lewisham Book Award titles have just been launched at Forest Hill School, with 5 books aimed at Year 7 & 8 and another 5 aimed at Year 9 & 10.

There are 5 months to read the books in and boys are encouraged to read all the chosen titles for their Year group in order to gain 25 epraise and a place at the LBA event in the summer term.

Moon Lane Books in Stanstead Road are giving 10% off on all the LBA titles for pupils wanting to buy their own copies rather than borrowing the library copies (copies are available in the library but there is a waiting list).

Scholastic Book Club is up and running at Forest Hill School!
Go to http://schools.scholastic.co.uk/forest-hill-school-for-boys to browse the latest books and order books online.
Towards the end of each term a new club date will be given and for every £1 you spend on each term’s Book Club, our school will earn 25p in Scholastic Rewards to help us buy new library books.
Your books will be delivered to the school and given to your son.  (If you spend over £25 you can choose free delivery to your home.)

FOREST HILL SCHOOL
We use cookies to ensure that we give you the best experience on our website. AcceptRead more